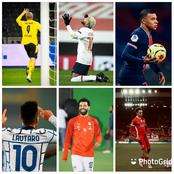 If your team could sign 2 of these players, who would you choose?

The world has watched a lot of great stars who have been tagged legends play for different clubs and country. And every generation has it's own iconic player.    Every team wants to sign a world class player,even Eyimba in Nigeria's professional football league will sign Lionel Messi if they have the means.     For instance,your team could sign 2 of these players,who would you choose?# Neymar Jr: The Brazilian is 28 and his transfer market value is estimated to be €128million. He has won a Uefa Champions 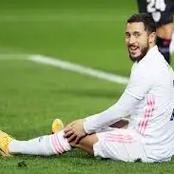 OPINION–Hazard Is Becoming A Liability To Real Madrid.

Ed3n hazard has brought nothing but injury stories since joining Real Madrid from Chelsea. Real had needed a player who would fill the gap Cristiano created when he left so they went for the Belgian attacker and he accepted. But since his coming, hazard has trashed the High expectations of fans as he has been unable to produce his magic at the Spanish club, though he has had few moments of awesomeness. From one injury to another, hazard has now increased in weight, literally, as seen by nadrid fans. The worst 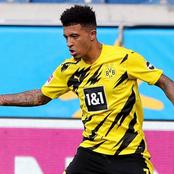 Manchester United likely to go in for Sancho again this summer but the question is: should they?

Manchester United seem likely to go in for Jadon Sancho again this summer, but the question is, should they? At the start of August last year, it was widely reported that Jadon Sancho was, depending where you read, either close to agreeing personal terms, according to Sky Sports, or indeed had according to The Guardian, agreed personal terms with Manchester United. It seemed that he was on the brink of joining the red side of Manchester, just three years after leaving the blue side.  However, as we all know, 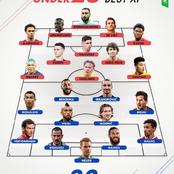 In this article, you shall see team of players who are under 23 years old and over 33 years old. The teams who are over 33 years old have few years to play football while the under 23 best Xi players are the future of football. Check out the image below for more details. Under 23 years Best Xi For each position. Goalkeeper and forwards: Gianluigi Donnarumma, Kylian Mbappe, Erling Haaland and Jadon Sancho. Midfielders and Defenders: Phil Foden, Valverde, Joao Felix, Dayot Upamecano, Mathjis De Ligt. Alexander 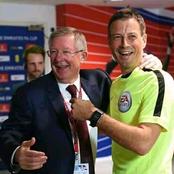 Meet The Only Referee To Have Given An Opponent 3 Penalties Against Man United At Old Trafford.

Manchester United's home ground (Old Trafford) remains one of the biggest and best stadiums around in football. When Sir. Alex Ferguson was still manager at the club, hardly did any team earn points at the Theatre Of Dreams. The legendary coach kept many records, one of which was an opponent never got more than 2 penalties at Old Trafford. But immediately he retired, that changed. So let's meet the only referee to have awarded an opposition 3 penalties against Manchester United at Old Trafford. Mark Clattenburg. 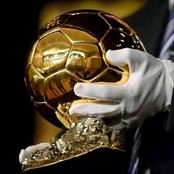 Are footballers really paid for the prestigious Ballon D'or award? These is definitely one of the questions that football fans normally ask, but sometimes they do not get answers in the viewing center, So today I would be telling you how footballers make their money from this prestigious award. The Ballon D'or award is an award giving by france football to the best player after a football season, if is eligible for clubs who are in Europe Top 5 leagues. Football players who win the Ballon D’or don’t really 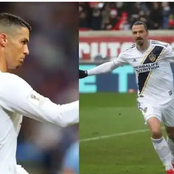 Juventus star Cristiano Ronaldo is reportedly the first man to reach this milestone in the footballing world, the 5 times ballon d'or and 4 time European golden boot winner made history after netting a goal in every single minute of a match, the super star who scored a remarkable 450 goals for real Madrid and 759 total career goals have continued to amaze fans with incredible records. well,the award winning icon now share this record with swedish striker Zlatan Ibrahimovic who is reportedly the second football 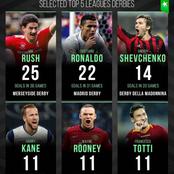 Players in the top five league derbies with the most goals.

While the beautiful game is renowned for uniting the world over their love of the game, loyalty to one's favorite soccer team can put even the closest of friends drawn at daggers. Football rivalries are as old as the beautiful game itself, owing to the passion and competition involved in the game. And one of football's biggest rivalries is the Manchester Derby. The Manchester Derby pits Manchester United against Manchester City and was first played in1881, contested by two clubs set up in Manchester. Old Trafford 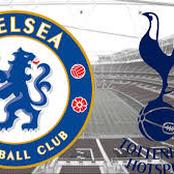 The English League was changed to the Barclay's Premier League in 1992. Ever since then Chelsea and Tottenham have been competing on the top level of the Premier League. Chelsea Football Club and Tottenham are Premier League club's based in London. Both teams have played each other severally both in the league division and premier league. The first Premier League match between them was played on the 5th of December 1992. The game ended 2-1 in favour of Chelsea. Premier League Head-To-Head Statistics. Total matches