How I Almost Got Scammed On Facebook Yesterday, Every Nigerian Needs To Read This

I am writing this article today to warn all Nigerians about the operation of fraudsters on Facebook, using my experience yesterday as a point of study.

Yesterday, I got a message from a Facebook friend of mine with the name "Hilija Aisha Buhari", a friend I have never chatted with before. It was surprising to me though because when I took a look at the profile details of this friend of mine, it was the exact profile of Aisha Buhari, the wife of the President of the Federal Republic of Nigeria.

I became confused, not knowing whether it is the real Aisha Buhari or it is one of the random Internet fraudsters out there looking for someone to prey on.

Well, like the saying goes, you wouldn't know until you have tried something. So, I decided to respond to the message. During the conversation, she told me that she wanted to assist me and my family with the sum of N300,000 under the condition that I won't misuse the money. She then told me to contact her financial agent after which I should get back to her. 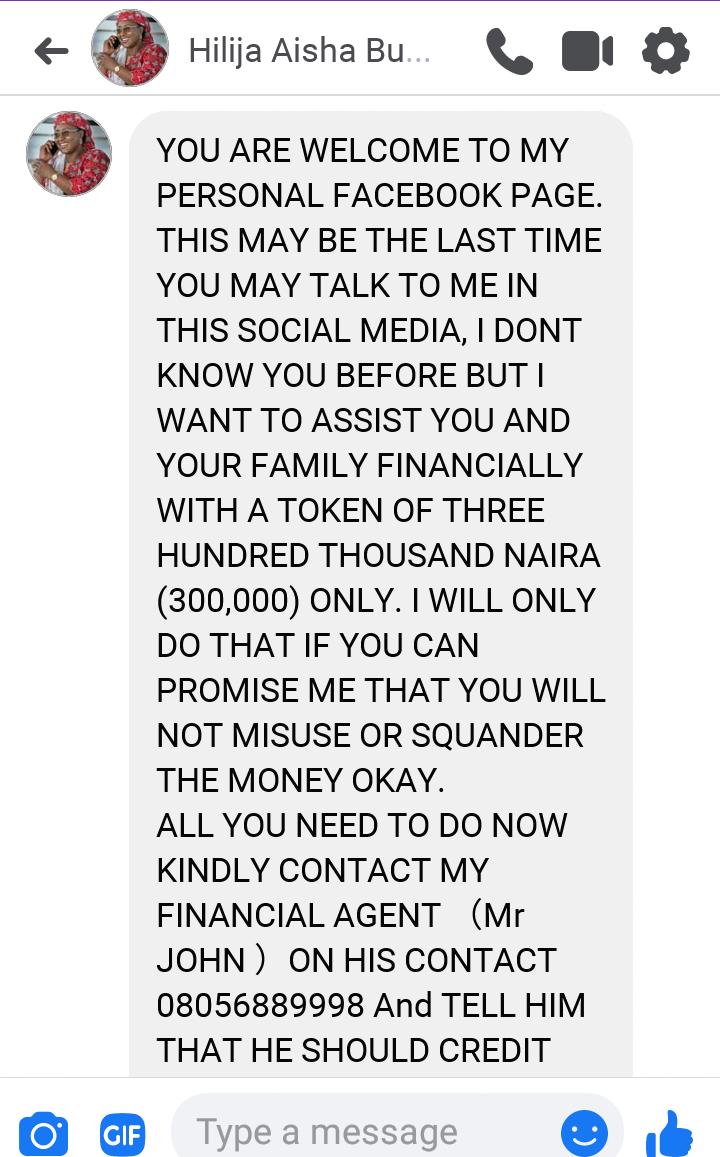 I opened my phonebook, dialed the number and we started speaking. The voice from the other end of the call belonged to a guy. After asking me various questions, he told me to send my account number to him immediately so that I can receive the money.

I dropped the call, I started having second thoughts so I decided that instead of sending my real account number, why not create a new account number without a Bank verification number (BVN) attached to it. It sounded like a safe idea, and I did so using my Zenith bank mobile banking. After creating the new account, I sent the details to him. After some time, the guy called me again telling me that he would have to add me to a Facebook group where I would be paid.

It was at this point that I realised that the whole thing was a scam, because there is no connection between me joining a Facebook group and getting the money they promised me.

A few moments later, I received a message from Facebook with some digits code. The guy called me and told me to send him the code so that I can be added to the group. Immediately he said that, I ended the call and busied his calls afterwards.

I did that because, assuming I gave him the five digit number, he would have gained access to my Facebook account login details and would have used it to swindle my contacts using my name.

Imagine if that had happened, it would have caused a lot of irreparable damages as my name would have be soiled and I most probably would have been tagged as a 'fraudster'.

These stuffs are real, they are becoming more and more intelligent, finding new ways to defraud any gullible person that may come their way. Be careful, there are a lot of fraudsters out there waiting for any body to prey on.

Thanks for reading and don't forget to like and share so that others could see this as well.