History : Who founded opera mini and when was it founded?

By HistoricalFacts (self media writer) | 1 year ago

Opera mini is a mobile web browser developed by opera software As. It was primarily designed for the Java ME platform . It was initially released on 10th August 2005. Opera mini supports all Kind of operating system ranging from Android-Os-Window-Blackberry-Symbian to Java. The platform is currently available in 90 languages.

In February 2013, 300 million unique active users and 150 billion page views severed during that time were also recorded. As of the time of writing this article, the platform is boosting of over 500 million active users thanks to the advancement in technology.

The company headquarter is located at Islo Norway with additional offices in Sweden, Poland and China. The companies headquarter at Islo Norway.

Founder And Foundation Of The Platform

Opera mini software was founded as an independent company in Norway in 1995 by Jon Stephenson Von Tetzchner and Geir loarsoy. The company was created to continue what was originally a research project at Telenor, The largest Norwegian telecommunications company. Opera's first product, the opera web browser version 2.10 for only windows was publicly released in 1996. Opera software had an IPO in February 2004, and first released on march 11, 2004. Jon born on 29 Aug 1967 in Reykjavik is an Icelandic-Norwagian programmer and business man. He is also the Co-founder and CEO of Vivaldi Technologies. Jon Stephenson von Tetzchner is the son of the icelander Elsa Jonsdottir and the Norwgian Stephen von Tetzchner, a professor of psychology. Tetzchner grew up around Skolabraut in the Reykjavik surburb of Seltjarnarnes with his grandparents. Tetzchner went to secondary education at Menntaskolinn I Reykjavik before continuing his studies in Norway where he made his career. 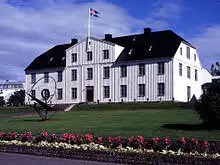 The Menntaskolinn I Reykjavik junior school he attended.

Tetzchner holds a masters degree in computer science from the university of Islo.

pls follow up for more article in this category.

whats your take on this article?

Content created and supplied by: HistoricalFacts (via Opera News )