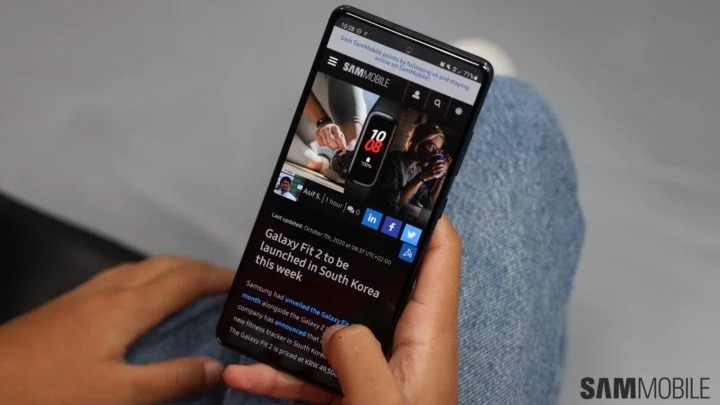 When the Galaxy S20 FE (Fan Edition) went official, we opined how it would destroy OnePlus’ market position thanks to the insane value it offers for the asking price, especially for a Galaxy smartphone. And as I use the Galaxy S20 FE more and more, I feel there is a phone in Samsung’s own lineup that is absolutely destroyed by the company’s new ‘affordable’ flagship, and that’s the Galaxy S20+.

When the Galaxy S20 series first launched, we found the Galaxy S20+ to be a more attractive proposition compared to the Galaxy S20 Ultra for the majority of customers. While it doesn’t have crazy 100x ‘Space Zoom’ like the Galaxy S20 Ultra or a big 5,000 mAh battery, it has just the right ingredients that make it a solid phone that will give most people no reason to complain nor leave them wanting more.

Unless you want the S20 Ultra, the Galaxy S20 FE is the best option

The S20 FE has a screen size that sits right between that of the Galaxy S20 and S20+, and you get the same smooth 120Hz refresh rate. The bezels are a little too big, but they aren’t something that will concern when you take the money you’re saving into account (no pun intended). For taking photos, the S20 FE has the same main camera as its non-Ultra siblings and a zoom camera that’s better once you move past 10x magnification in terms of sharpness and detail.

Except for slightly lower RAM on the base variant, performance on all three phones is identical because they all share the same Exynos and Snapdragon chipsets. But the S20 FE has the advantage of being powered by the more efficient Snapdragon 865 on the 5G model in all markets where the 5G model is being sold instead of forcing the inferior Exynos 990 down your throat.

The software package on the S20 FE is similarly unchanged, with none of the features (such as wireless DeX) cut out and with three years of updates guaranteed. Ditto for battery capacity. Both the Galaxy S20 FE and the Galaxy S20+ have a 4,500 mAh battery with 25W super fast charging support, and the S20 FE actually lasts longer in our testing on both the Exynos and Snapdragon models.

Of course, there have been some compromises made to reach the Galaxy S20 FE’s $699/€749 price tag. It’s got a plastic back, its display isn’t as bright and doesn’t feature HDR10+ certification, there’s no 8K video recording, and Samsung isn’t shipping it with a 25W charger or earphones in the box. There are also the complaints about touchscreen issues on the phone, issues that the one and only software update released for it hasn’t fixed on our affected unit.

If the touchscreen problems are hardware-based, then Samsung will likely replace all affected units under warranty, so I don’t think it should be held against just how good of an offering the Galaxy S20 FE is. And how it makes both the Galaxy S20 or Galaxy S20+ so unnecessary. That’s not to say anyone who owns either device should feel bad about their purchase, but if you’re in the market for a new smartphone right now and aren’t interested in the Galaxy S20 Ultra (or the Note 20 Ultra), I’d suggest getting the Galaxy S20 FE and saving yourself a boatload of cash in the process.

Content created and supplied by: Chimdi185 (via Opera News )