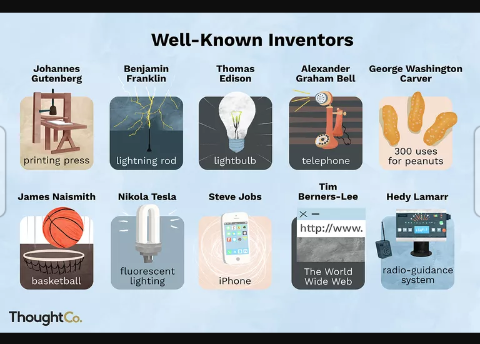 There have been many important inventors throughout history, but only a handful are usually recognized simply by their last name. This shortlist is of some of the esteemed inventors who are responsible for major innovations such as the printing press, the light bulb, television and, yes, even the iPhone.

The following is a gallery of the most popular inventors as determined by reader usage and research demand. Read on to learn more about these well-known, influential inventors

Contrary to what many people believe, Nigeria is full of many brilliant minds, who, if given the opportunities afforded their foreign counterparts, will go on to change the world with their ideas. Doubt this? The following inventors are proof.﻿

1) The girls who invented a urine-powered generator.﻿

Back in 2012, Duro-Aina Adebola, Akindele Abiola, Faleke Oluwatoyin, and Bello Eniola, four teenage girls in secondary school developed a generator that’s powered with urine and showcased it at Maker Faire Africa. According to the girls, this is how the contraption works:﻿

Urine is put into an electrolytic cell, which cracks the urea into hydrogen, nitrogen, and water.﻿

The hydrogen is purified with a water filter and is pushed into the gas cylinder.﻿

Ever heard of the world’s fastest and most efficient computer? It was actually invented by Dr. Philip Emeagwali. He carefully studied the efficient ways in which bees communicate and build honeycombs and decided to create a computer that could work that way.

The result was that he successfully combined 65,000 processors to invent the world’s fastest the computer, which performs computations at 3.1 billion calculations per second. Today, Dr. Philip Emeagwali’s invention is applied in weather forecasting supercomputers as well as computers which can predict global warming. The Emergency Blood Auto Transfusion System is a low-cost blood transfusion system which has the ability to recover blood from a patient’s internal bleeding organs and then re-infuses the blood back into the patient’s blood system, thereby preventing blood loss.

Benjamin Franklin: Lightning rod, bifocal glasses and many others.

Johannes Gutenberg: Combined and improved inventions such as movable metal type and ink used these to improve printing technology.

Thomas Edison: Worked with electricity and sound improving light bulbs and telephones as well as motion picture cameras and other inventions.