Check Out Some Facts About The Njaba River In Imo State

Njaba is the stretch of water body that cuts through the guts of Awo-Omamma town in Oru East Local Government Area of Imo State for travelers on the Owerri-Onitsha expressway. Some may recall it as the river that supposedly resisted Julius Berger's attempts to build a bridge across it until human sacrifices (some say) were made to appease the river god.

On the other hand, that river defines the boundaries between Umuaka and Okwudo settlements in Njaba LGA for travelers on the Orlu-Owerri road in Imo State. While these statements aren't entirely inaccurate, the truth is that Njaba is much larger than what people see or hear.

Njaba gets its name from Isunjaba, which is now part of the Isu LGA in Imo State. According to certain oral histories, the name Isunjaba is a mispronunciation of the original Isi Njaba (the source of Njaba) by European colonial masters who arrived in the town in the early 1900s.

However, according to another version of the people's origin stories, Njaba is also the birthplace of the Isunjaba. The Njaba River was formed by Chukwu Abiama (the Supreme God), and a man named Njaba came from the river, according to this version, which grants the people autochthonous status. 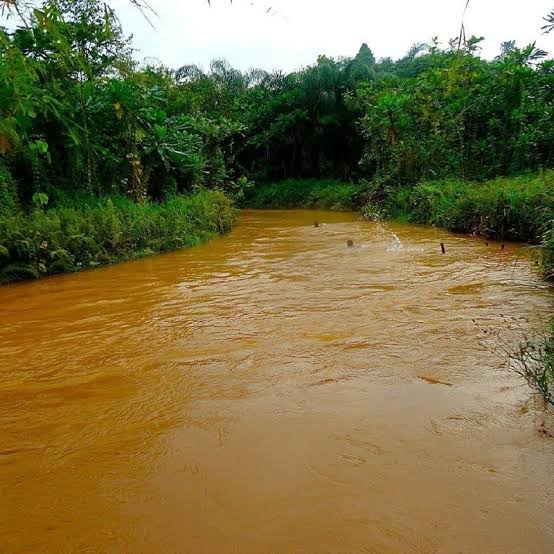 Njaba was subsequently given a bride named Lolo by God. Njaba and Lolo had a son named Isu as a result of their relationship; hence, Isu Njaba was born (Isu, the son of Njaba).

The Njaba River rises from a certain rock in the Isunjaba-Amucha valley and flows through Ubah village in Isunjaba (where it is known as Iyi Ubah), then through Ekwe until it bursts out at the borderline between Umuaka and Okwudo along the Orlu-Owerri road, then through tiny villages until it explodes again at Awo-Omamma along the Onitsha-Owerri.

There, it crosses the road and flows endlessly through Awa community in Oguta L.G.A. until it unites with the Urashi River in Oguta to form a single water body that eventually empties into the Niger River, from where it continues to who knows where.

Njaba is both a god and a goddess. Eke Njaba is its totem (the sacred python). Every Isu man welcomes Eke Njaba into his home, and it is normally treated with the utmost hospitality. When it comes to heralding its arrival, compromises are sometimes made. Occasionally, eggs and chicks are offered to it because the supplicant believes that by doing so, he is putting himself in a position to gain favor from the deity.

No one, native or guest, is allowed to lift a hand against it or kill it, according to tradition. Anyone who breaks the norm, whether intentionally or unintentionally, shall give the snake a proper burial equal to that of a titled man in order to cleanse the soil he has defiled. Ostracism is an alternative punishment.

However, Christianity has supplanted many of the previous customs. In their quest to destroy all kinds of what they labeled "heathendom," some Christians began murdering Eke Njaba indiscriminately. "Eke gbalaga, ndi choochi abiala igbu gi," a common cry among the people, translates as;

"Eke escape for your life, the Christians are coming to kill you." And, in order to save its species from extinction, and as if responding to the call to alert by the people, Eke Njaba has retreated far into the forests along the Njaba valley such that today, it is very rarely seen at all, let alone within the vicinity of human habitation.