Here Are The interesting facts about Africa.

This are some interesting facts about Africa. 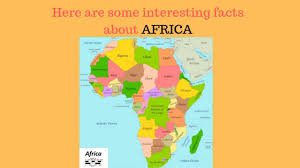 1)Africa is the second largest of earth's seven continents and makes up approximately 22℅ of the earths total land area.

2)There are a total of 54 independent nations in Africa.

3)The current population of Africa is nearly 1 billion.

4)Africa is the most centrally located of all the continents with both prime meridian (0 degrees longitude) and the equator (0 degrees latitude)passing through it.

6)Arabic is the most common language spoken in Africa with nearly 170 million people speaking it.

8)The most populated city in Africa is the Egyptian capital Cairo with an estimation of 17 million residents.

9)The largest country in Africa is Sudan with an estimation of 967,490 square miles (2.5 million square kilometers).

10)The smallest country in Africa is the island nation of the Seychelles with a total area of just 175 square miles (453 square kilometers).

11)Population experts have estimated at least 3,000 distinct ethnic groups in Africa and Nigeria has about 370 recognized tribe within its population.

12)Lake Victoria is the largest lake in Africa and the second largest fresh water lake in the world.

13)The Nile river which drains into the meditation sea at the north eastern edge of Africa,is the longest river in the world 4,132 miles (6,650 kilometers).