Biography of the world wealthiest man.

By Abiodunhasty (self media writer) | 1 year ago

Mansa Musa, was the tenth Mansa (which translates to "sultan", "conqueror"or "emperor") of the Mali Empire, an Islamic West African state. He has been described as the wealthiest individual of the Middle Ages.

Mansa Musa was born in 1280 into a family of rulers. His brother, Mansa Abu-Bakr, ruled the empire until 1312, when he abdicated to go on an expedition.

According to 14th Century Syrian historian Shibab al-Umari, Abu-Bakr was obsessed with the Atlantic Ocean and what lay beyond it. He reportedly embarked on an expedition with a fleet of 2,000 ships and thousands of men, women and slaves. They sailed off, never to return.

Some, like the late American historian Ivan Van Sertima, entertain the idea that they reached South America. But there is no evidence of this.

In any case, Mansa Musa inherited the kingdom he left behind.

Under his rule, the kingdom of Mali grew significantly. He annexed 24 cities, including Timbuktu.

The kingdom stretched for about 2,000 miles, from the Atlantic Ocean all the way to modern-day Niger, taking in parts of what are now Senegal, Mauritania, Mali, Burkina Faso, Niger, The Gambia, Guinea-Bissau, Guinea and Ivory Coast .

With such a large land mass came great resources such as gold and salt.

During the reign of Mansa Musa, the empire of Mali accounted for almost half of the Old World's gold, according to the British Museum.

And all of it belonged to the king.

"As the ruler, Mansa Musa had almost unlimited access to the most highly valued source of wealth in the medieval world."

"Major trading centres that traded in gold and other goods were also in his territory, and he garnered wealth from this trade," she added.

At the time of Musa's ascension to the throne, Mali in large part consisted of the territory of the former Ghana Empire, which Mali had conquered. The Mali Empire consisted of land that is now part of Mauritania and the modern state of Mali. During his reign, Musa held many titles, such as "Emir of Melle", "Lord of the Mines of Wangara", and "Conqueror of Ghanata". 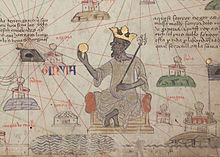 Musa conquered 24 cities, along with their surrounding districts.

During Musa's reign, Mali may have been the largest producer of gold in the world, and Musa has been considered one of the wealthiest historical figure.

However, modern commentators have concluded that there is no accurate way to quantify Musa's wealth.

Musa is generally referred to as "Mansa Musa" in Western manuscripts and literature. His name also appears as "Kankou Musa", "Kankan Musa", and "Kanku Musa". Other names used for Musa include "Mali-Koy Kankan Musa", "Gonga Musa", and "the Lion of Mali".

He helped his empire reach tremendous growth by encouraging the arts, literature and architecture.

What is known about the kings of the Malian Empire is taken from the writings of Arab scholars, including Al- Umari, Abu-sa'id Uthman ad-Dukkali, Ibn khaldun, and Ibn Batutta. According to Ibn-Khaldun's comprehensive history of the Malian kings, Mansa Musa's grandfather was Abu-Bakr Keita (the Arabic equivalent to Bakari or Bogari, original name unknown − not the sahabiyy Abu Bakri), a nephew of Sundaita Keita, the founder of the Malian Empire as recorded through oral histories. Abu-Bakr did not ascend the throne, and his son, Musa's father, Faga Laye, has no significance in the History of Mali

Mansa Musa came to the throne through a practice of appointing a deputy when a king goes on his pilgrimage to Mecca or some other endeavor, and later naming the deputy as heir. According to primary sources, Musa was appointed deputy of Abubakari Keira ll, the king before him, who had reportedly embarked on an expedition to explore the limits of the Atlantic ocean, and never returned. The Arab-Egyptian scholar Al-umran quotes Mansa Musa as follows:

The ruler who preceded me did not believe that it was impossible to reach the extremity of the ocean that encircles the earth (meaning Atlantic), and wanted to reach that (end) and obstinately persisted in the design. So he equipped two hundred boats full of men, as many others full of gold, water and victuals sufficient enough for several years. He ordered the chief (admiral) not to return until they had reached the extremity of the ocean, or if they had exhausted the provisions and the water. They set out. Their absence extended over a long period, and, at last, only one boat returned. On our questioning, the captain said: 'Prince, we have navigated for a long time, until we saw in the midst of the ocean as if a big river was flowing violently. My boat was the last one; others were ahead of me. As soon as any of them reached this place, it drowned in the whirlpool and never came out. I sailed backwards to escape this current.' But the Sultan would not believe him. He ordered two thousand boats to be equipped for him and for his men, and one thousand more for water and victuals. Then he conferred on me the regency during his absence, and departed with his men on the ocean trip, never to return nor to give a sign of life.

The death date of Mansa Musa is highly debated among modern historians and the Arab scholars who recorded the history of Mali. When compared to the reigns of his successors, son Mansa Maghan (recorded rule from 1337 to 1341) and older brother Mansa Suleyman (recorded rule from 1341 to 1360), and Musa's recorded 25 years of rule, the calculated date of death is 1337.

Other records declare Musa planned to abdicate the throne to his son Maghan, but he died soon after he returned from Mecca in 1325.

According to an account by Ibn Khaldun, Mansa Musa was alive when the city of Tlemcen in Algeria was conquered in 1337, as he sent a representative to Algeria to congratulate the conquerors on their victory.

Content created and supplied by: Abiodunhasty (via Opera News )