By LiveTimesNG (self media writer) | 7 months ago

The people of Ipole-Iloro in Ekiti West Local Government Area of Ekiti State have applauded the Governor of Ekiti State, Dr. John Kayode Fayemi for the commitment of the administration towards repositioning Arinta Waterfall for global tourism attraction.

Speaking on behalf of the people of the town, during a brief ceremony to mark the official handing-over of the Arinta Waterfall to a concessionaire, the Olupole of Ipole-Iloro, Oba Ezekiel Oladele, expressed appreciation to the State Government. The monarch emphasized that the trust of the Ipole-Iloro people in the Dr. Fayemi administration has finally been justified. Oba Oladele described the Governor as a true lover of Ekiti who is passionate about the sustainable development of the State. He said the people of ipole had, for a long time, watched over the waterfall in the belief and hope that, some day, a government that is sincere about development of tourism would pay necessary attention and show adequate commitment.

He said the people of the town would be eternally grateful if the vision of the founders of Ipole-Iloro ultimately became fulfilled. He opined that the concessioning of the site to a private company to develop and manage for a specified period was a welcome development.

Oba Oladele congratulated the Olupole in- Council for being living witnesses to what he described as a watershed in the history of Ipole-Iloro. The representative of the Ipole-Iloro youths, who is the Supervisory Councillor for Health in Ekiti West, expressed gratitude to the State Government for paying attention to Arinta which he described as a legacy endowment.

He therefore pleaded with the representative of ROAG, the company which is taking over the waterfall, Femi Agboola, to consider the Ipole-Iloro youths for employment before, during and after the developmental phases at the site must have been completed. This, he said, was in order to reduce unemployment and further strengthen communal support and security.

He assured that the youths of Ipole-Iloro were determined to partner with the company to sustain the development of tourism activities in the area. He buttressed the assertion of Oba Oladele about Ipole-Iloro being unique and lucky in terms of friendly neighborhood and reliable internal security network.

Earlier, the Hon Commissioner for Arts, Culture & Tourism, Prof. Rasaki Ojo Bakare thanked the monach for believing in the current administration. He described Oba Oladele as a model among royalties in the State for his consistent show of eagerness towards the development of his community and welfare of his citizens. He said the State Government has resolved to ensure effective management of the tourism assets of the State by handing them over to private investors for necessary development and optimal performance of tourism businesses in the State. This, he said, for example, explains the fresh breath of life being enjoyed by the Fajuyi Memorial Park which was handed over to Motiff Funland in October, last year. Professor Bakare therefore solicited the support of the monarch, the elders and the entire people of ipole iloro towards boosting tourism activities in the State. 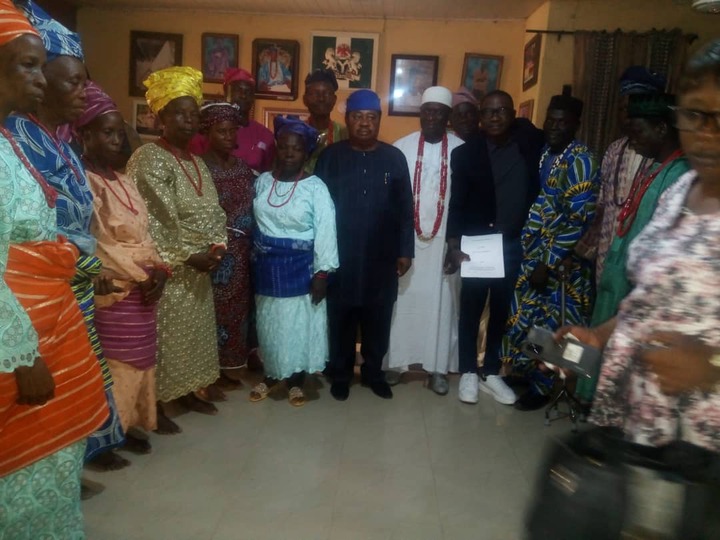 Bakare however added that the agreement entered into by the State Government and the Company specifically stated that if, within a particular period, there were no signs to indicate the seriousness of the company or adequate capacity to do all that have been promised, the State Government would not hesitate to terminate the concession agreement and scout for a more promising concessionaire.

While responding, the representative of ROAG, assured the State Government and the people of Ipole-Iloro that his company would live up to expectation. He said ROAG would make efforts to ensure the revival of some of the vital infrastructures of the community particularly the ones that fall within bearable costs. He also assured the youths of the community that efforts would be made towards constructively engaging them and getting them substantially involved in the development processes of Arinta Waterfall. Present at the ceremony were: the Olupole in- Council, the Senior Special Assistant to the Ekiti State Governor, Ambassador Wale Ojo-Lanre, a Senior aide to the wife of the Executive Governor, Alhaji Dauda Lawal, the Permanent Secretary, Ministry of Arts, Culture and Tourism, Alhaji Titilope Ibrahim Ganiyu, senior members of management of the Ministry as well as some key members of ROAG. The highlight of the brief ceremony was the shower of royal benediction upon the management of the company for success.