Have You Ever Heard Of Sand Dollars? 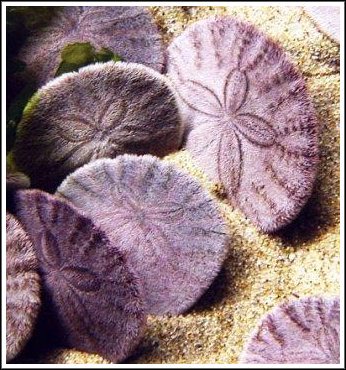 Not so long ago, Children were told stories about sand dollars. They were pressed sand, or more colorfully, mermaid money. Sand dollars look like round white coins, thus their name. But some adults as well have superstitions about them. Some think finding a whole one is rare and lucky while others believe they’re gifts from God, or a sign from Heaven. One legend says the five marks on a sand dollar are actually five white doves and when broken open releases them to spread peace and happiness. The legend of the sand dollar has become a Christmas and Easter staple. See the accompanying video.

People who take sand dollars from the water are cruelly killing the creatures, and that's unkind, of course, because they do feel pain. But they're also preventing the sea urchin from serving its purpose in the ocean — as an algae eater, a deep - depth oxygen provider and as food for other fish.

But as adults, we also realize they are animals living in sandy ocean beds. They are found along a beach, generally at low tide. Most found on a beach are already dead. In actuality sand dollars are marine invertebrates called Echinoids, meaning "spiny skinned creatures.”

The common sand dollar of the northeastern United States is classified as Echinarachnius Parma and is closely related to starfish, sea lilies, sea cucumbers and sea urchins. Their flat outer shells are circular and they are able to move about by means of many tiny spines imbedded in their shell. In the center, a petal like design is formed by numerous perforations called gonopores.

Some mistakenly believe picking them up to keep is wrong because they are alive. As stated before most washed ashore are already deceased. The ones that aren’t are most likely in the process of dying. It’s not difficult to identify dead ones. They will be smooth on both sides, and usually a lot whiter in color. It should be noted here, most beaches and state parks prohibit removing any live sea life from their habitat. 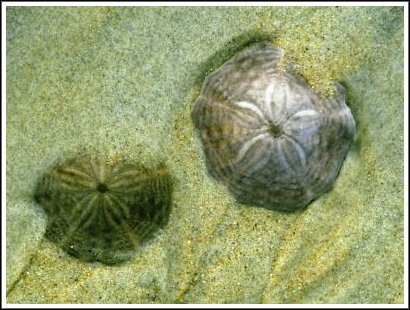 Many people collect sand dollars and use them to make spectacular sand dollar crafts. They are commonly used in creating home décor; wedding favors, place card's … the list is virtually endless. Some paint beach scenes, sunsets or put personalized messages on them. But before any creation is made they must first be preserved properly:

· Soak them in a bucket of fresh water, changing the water after it turns brownish red. Repeat until the water remains clear, otherwise they will begin to give off a foul odor.

· Next, soak them in a mixture of bleach water for 15-20 minutes. Three parts water to one part bleach. Any longer and they become yellowish, brittle and crumble.

· Rinse with running water for at least two minutes.

If your sand dollars aren’t as white as desired at this point, try bleaching them in the sun a while. Or you can spray them with white paint or lacquer. However, if you have the time, place them on an ant mound. The ants will clean them while the sun does the rest. This method takes about week.

The last step is the hardening process. Mix white glue with water in equal parts and use a sponge brush to coat them. Once they are dry a wide variety of things can be made.

Are sand dollars worth anything?

A sand dollar is member of a species of sea urchins, or the skeleton of one that has washed up to shore. Inherently, they have little or no value. Like everything else, they are worth whatever you can get someone to pay. Someone with a salt water aquarium might pay something for a living one, perhaps $5 to $15.

Why do Sand Dollars have a star?

Like all echinoderms, sand dollars have tube feet. ... On the underside of a sand dollar, there is a star pattern spreading out from the center where the mouth is. This star pattern is made up of grooves that are called food grooves. Sand dollars filter sand and water, catching plankton and other things on their spines.

What is the biggest sand dollar?

According to Guinness World Records, the largest sand dollar on record measures 5.826 inches at its smallest diameter. The maximum diameter is 6.299 inches/

What lives inside a sand dollar?

Have you ever walked along the beach and found a sand dollar shell? This shell is called a test and is the exoskeleton of a sand dollar, a burrowing sea urchin. The shell is left behind when the sand dollar dies and its velvety spines fall off to reveal a smooth case underneath.

How can you tell how old a sand dollar is?

You can tell their age by their rings Just like counting the rings on a tree stump, you can count the growth rings on the plates of the exoskeleton to see how old a sand dollar is, according to the aquarium. They usually live six to 10 years.

When you break open a sand dollar?

When you turn over the sand dollar, you see the outline of a poinsettia, the Christmas flower. And if you break open a sand dollar, five doves shaped pieces emerge. Doves are often used in art and literature as a symbol of peace and goodwill. Now you know the legend of the sand dollar, a story of hope and Peace.

Is finding a sand dollar lucky?

Any beachcomber who finds Sand Dollars along their stroll considers it a lucky omen! They aren't likely to be found on many beaches, but there are several spots around the United States where you'll find them, including one of my favorites, Wingaersheek Beach, in Gloucester, Massachusetts.

Is it illegal to take sand dollars from the beach?

In most states taking a live sand dollar is illegal, but laws vary about collecting a dead one, so check for signs at the beach or ask an employee. ... When they are alive, sand dollars secrete echinochrome, a harmless substance that will turn your skin yellow.

What is the spiritual meaning of a sand dollar?

Topic for your next Opera News hub - The difference between a starfish and a sand dollar. Trust me... someone will find it useful for sure!