Historical Background Of The Olumo Rock In Abeokuta 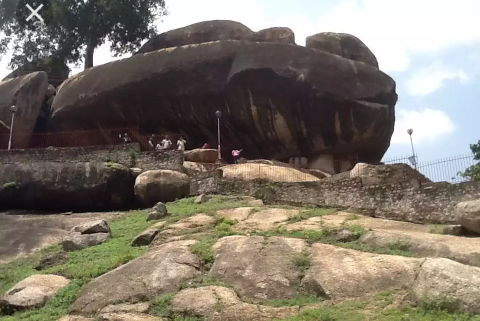 Olumo Rock is a mountain in south-western

Nigeria . It is located in the ancient city of

Abeokuta , Ogun State, and was historically used as a natural fortress during inter-tribal warfare in the 19th century. Its patron spirit is venerated in the Yoruba religion as an orisha. Olumo Rock is annually celebrated with lots of sacrifices.

Olumo Rock is located in the ancient city of Abeokuta, Ogun State. Historically, the rock was a natural fortress for the Egbas during inter-tribal warfare in the 19th century. Olumo is a popular tourist attraction. It provided protection to the Egba people when they needed it,

and is now held in high esteem by the members of the clan. [1][2][3] The mountain, one of the most popular tourist destinations in Nigeria, sits in the heart of Abeokuta – a name which means “Under the rock” in the Yoruba language ; it has a height of 137 metres above sea level. Abeokuta was originally inhabited by the Egbas, who the rock provided with sanctuary and gave a vantage point to monitor the enemy’s advance, leading to eventual triumph in war. The town of Abeokuta eventually grew as these new settlers spread out from this location.

Olumo Rock is located in the ancient city of Abeokuta, Ogun State. Historically, the rock was a natural fortress for the Egbas during inter-tribal warfare in the 19th century.

Abeokuta is just about an hour's drive from the bustling metropolitan city of Lagos, providing convenient access to an array of hotels, restaurants, clubs, casinos and various nightlife activities. Lagos is also home to the closest airport to Abeokuta, the Murtala Muhammed International Airport. Hotels in Abeokuta within a minutes' drive from the rock include Gateway Hotel and Olumo Guest House.

New renovations completed in early 2006 upgraded the infrastructure of the site to include a new museum, restaurants, water fountain and the ancient Itoku market, where local artisans and traders enjoy haggling over prices just as much as the customers like to find a bargain. The market lies just outside the Olumo rock premises. It is the center of the indigenous Abeokuta industry of tie-and-dye, locally known as adire. Adire crafters, usually women both old and young, show off their designs in sheds alongside the roads. Behind these sheds are buildings where many of these crafters live and work and where their parents did before them. In places where the plaster has cracked off the walls, you may see traces of the mud bricks used in the original construction.

The locals are very friendly and if asked, will often give tourists and visitors informal tours of the dyeing areas. Other popular items to watch out for include local beads, bracelets, sculptures and musical instruments like the sekere and talking drum.

The view of the Ogun river from Olumo Rock

The entrance to the Olumo Rock

An entrance of the cave in Olumo Rock

A trip to Olumo rock usually commences with a climb up the man-made stairs carved into the rock. The journey continues with climbs on irregularly sized rocks (or ladders which are now provided) through a narrow corridor that leads to the top of the rock. All along the way, catch sights of carvings in the rock, cowrie-studded statues and the ancient abode of the priestesses of the mountain deity who live in huts on the rock. Professional guides are available.