Fiction: The Story Of A Really Stupid Hero. 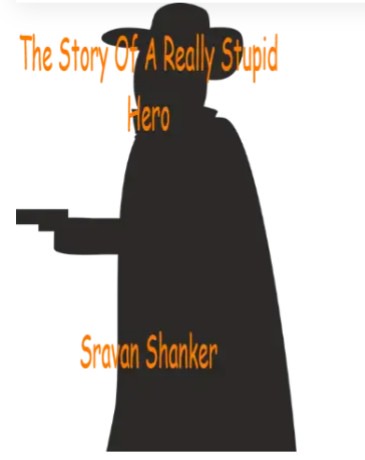 THE STORY OF A REALLY STUPID HERO.

Ours have always been a culture celebrating heroism. Hollywood, Bollywood, Dollywood and all other woods all have hero movies. That one man who single handedly defeats an entire army. Sometimes, it is hilarious what they do. Mission Impossible has been named so for a good reason. How does Baahubali simply launch men like anything ??!! That men are supposed to be DEAD when they land, let alone fighting a war.

Movie industries hate physics, breaking it at every chance. Same case for reality. I’m not saying, there aren’t any real - life heroes. People are famous for a reason. But we doing it is very, very slim. How do I know it? I have some real - life experience. Here is the story -

A man came, bought a toothpaste and went at nine. Now, almost no one came, nine to ten customers were extremely rare. I sat back, watching Netflix on my phone when the guy came in. I was surprised and irritated. I took out my ear pods and slightly annoyed said “how may I help you ?” He silently walked up, and I noticed that he had a mask. Then he took out a pistol and pointed it to my temple.

WHOOM !!! Everything went slow- mo. The masked guy and everything was blurred, and I could only focus on the gun. “Money” his deep voice said. I froze. “Money” he repeated. My right hand slowly moved to the cash register and opened it. He plopped a sack on the table and motioned with his gun for me to fill it. I did as he asked. As I was doing so, he slowly walked into the aisles of the store, presumably looking for something worthy.

As I was filling the sack, a thought occurred. The emergency button. It automatically dialed the police, alerting them of a crime in the store. I weighed my options, the emergency button was built into the alarm system. He would be instantly alerted to me pressing the button. One shot later, I would be history. Way too risky. I was pondering what a bad design choice it was when the alarms blared. I looked down to see my hand pressed firmly against the button.

The guy peeped through the aisles. His eyes widened. He was visibly angry. The pistol rose to my level. And he pulled the trigger.

I slammed into the floor so quickly that I would need stitches for my chin. Behind me, a glass vase shattered, glass flying everywhere. Bang! Another shot. This one ricochet of the wall. Adrenaline flooded by body. Flight or fight instinct took over me.

Scrambling into a four -legged position and slowly crawled towards the door. Bang !, a bullet whizzed mere inches from my face. I quickly scrambled back. The table was the only thing protected me. I looked around for something to throw at the guy. I instead noticed a selfie- stick and a piece of mirror from the broken vase. The gears began to turn. The mirror quickly found itself stuck on the selfie- stick’s phone holder.

Slowly the mirror rose above the table. The guy was quietly moving towards me, feet making no sound. Seeing my mirror, he was shocked, then angry. The pistol put a bullet through the mirror. But I had seen enough. A single bullet could kill me. The police would be coming. I just had to hold him off for some time. I had not taken into account the fact that the alarms were sure to attract attention.

The crinkling of paper increased. He obviously was not interested in secrecy anymore. I could not run anymore. Flight was not an option. Nor was freeze. The only remaining option was to fight. I had nothing to fight with though. It was all in or nothing. I was about to jump over and tackle him in a suicide attempt when the glass doors creaked open.

A teen boy had stepped in, an Ice Bar in his hand, obviously attracted to the blaring alarms. As soon as he saw the pistol, he froze. The ice bar crashed into the ground , spewing ice everywhere. The man changed his target, gun pointed firmly at the teen. The boy groped for the handle, finding only air. His throat could not produce a squeak, let alone a scream.

Now, some of the attentive audience might be wondering, “wait, aren’t you hiding behind the table? How did you see these events? Because ladies and gentlemen, I was jumping over the table. Here is my moment of heroism. Didn’t you get Goosebumps?

A slick parlour move, both my feet and one of my arm almost parallel to the table, with just a hand to support. But it turns out, my hands are basically two sticks of noodles. My wrist sprained almost immediately, and I lost balance, crashing into the floor. I would have laid there, clutching my wrist, like a sitting duck if it weren’t for the ice.

I slipped, sliding across the floor like an ice- skater. Except this particular skater had no shoes and no control. Legs pointing straight towards the guy, I crashed onto him. It turns out, he had no balance too ! He lost his footing, fell down and then lost his gun which skid across the room to the soft toy section. The heavy piece of metal crashed into the stomach of a cute teddy which squeaked out “You are my best friend. ”

We both scrambled to stand up, which was quite difficult given the slipperiness of the floor. I then tried to slide my way across the floor. When he saw that he jumped on me. Two dudes fighting for life, on a slippery floor. He was quite good, landing punch after punch, kick after kick, beating me into a pulp. He finally locked my hand, leaving me almost immobile on the floor. Almost.

I twisted myself, hitting the guy in the legs, making him fall. He really needs to work on his footing. He crashed into the soft toys section, launching a chorus of “I love you” s and “you Rock !!!”s. But my joy was short-lived. He twisted, his hand landing on the pistol. Pointing at me, he pulled the trigger. I heard a click and braced for impact. But it never came. I opened my eyes to see him frustratedly pulling the trigger again and again. The gun was empty.

He apparently decided that the gun was a good thing to knock me out with. He leapt, flushed with adrenaline and a survival instinct taking over his thought. He swung his gun. Scrambling backwards, my face missed the gun, it swinging mere centimeters away from my nose. A second swing found its target, hitting my nose, breaking the bridge. Blood spouted. The gun raised and he readied to strike, when something came flying. He barely had time to see an ornamental metal statue soaring with his head as the target. The shot was spot on. Bullseye. I turned to see the teen, a shocked and scared look on his face. Holding another metal statue in his hand.

That kid is receiving a bravery award today. I received a thank you from the store owner and a large chocolate cake from mom. I don’t want that award, mom’s cake is much better. The guy is in jail, for attempted murder and for the possession of illegal arms. Two witnesses were too much for that public prosecutor. He had shot me a murderous look when he was taken away. I have a feeling I will be seeing him again. But I can cross that bridge when it comes to it.

Ah, there is the kid. Waving to the crowd. Pride in his face. Like he was Tom Cruise or something then. More like a scared cat or something. How comes he gets an award and I don’t. I want an award. He deserves nothi- wait a minute, damn, I hate that kid now.