The Biggest and Busiest Airports in the World in 2020. 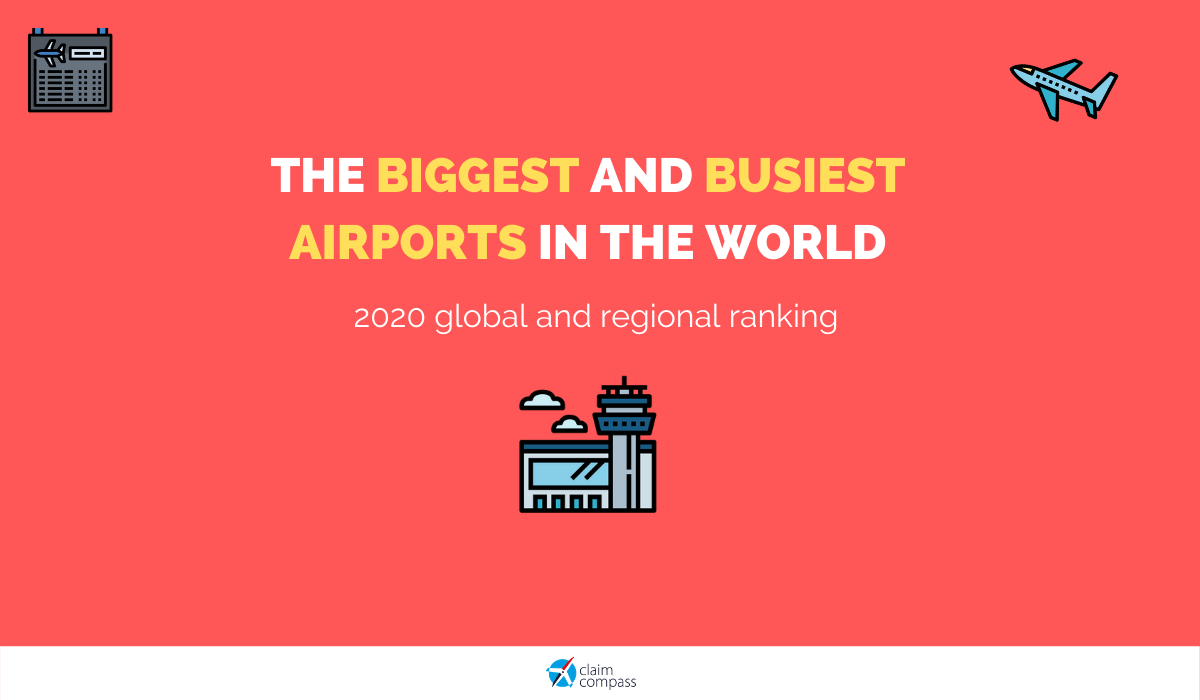 Have you ever been running late to catch a flight and struggled with the never-ending hallways and escalators you need to pass to reach your gate?

The biggest airports in the world make it feel like you’re walking through an entire city when you’re inside.

In 2020, they’re expecting over four billion passengers to travel by air. Now the biggest airports are also becoming the busiest airports in the world.

Since the airports are getting busier, they’re building bigger airports to accommodate all the passengers.

In September 2019, the world’s largest airport (based on area size) opened in Beijing, China. The Beijing Daxing International Airport will be able to handle over 100 million passengers per year.

Good thing for the passengers, they won’t have to worry about walking a marathon to get to their gate.

Architects are taking these considerations into their designs and balancing both size and convenience.

The architect who designed the new Beijing airport, Zaha Hadid, made a futuristic design in a starfish shape, making it easy for passengers to reach their gate in less than 8 minutes.

It will be interesting to see how airport design evolves in the years to come!

In the meantime, let’s take a look at all of the “superairports” of the world, both in terms of area size and the number of passengers they serve.

But first... did you know that if you had a delayed or cancelled flight, you could get up to 600€ in compensation?

Here’s a list of the biggest and busiest airports in the world 2020:

From Asia to America, the biggest airports in the world feel so gigantic that they deserve their own postal code.

And some even do!

The Dallas/Fort Worth International Airport (#3 on this list) has its very own ZIP code and emergency staff. It’s technically considered a separate city according to the postal service.

These huge airports have their own hotels, spas, restaurants and shopping centres. They really are so much more than a place to catch a flight.

Here’s a list of the top ten biggest airports in the world, based on actual airport size in square kilometers.

Beijing Daxing International Airport is the biggest airport in the world and the latest addition to the list of supersized airports, and they’re topping that list.

It cost a staggering $11 billion to build.

This airport is Beijing’s second international one in the city and it’s expected to also become the world’s busiest, with 100 million passengers passing through by 2040.

Nicknamed the “starfish”, after architect Zaha Hadid’s futuristic design, the airport was built for both convenience and eco-friendliness.

The starfish design makes it easy for passengers to travel from security to their gate in under eight minutes.

Its solar panels, waste heat recovery, and water management systems limits the environmental impact that such a big airport can make to the ecosystems in the area.

While it’s still early days for Beijing Daxing International Airport, they have big plans for the future, including flights that will cover 112 destinations around the world.

Despite that, it’s still an impressive place, with a total area of 780 square kilometres and a terminal area of 3.52 million square feet.

King Fahd International Airport opened over 20 years ago in 1999 and it’s located in Dammam, Saudi Arabia.

It serves as a hub for three major Saudi Arabian airlines including: Saudia, Aramco Aviation and SaudiGulf Airlines flynas.

The airport also houses a 250-room Hilton hotel and a Mosque that can accommodate 2000+ worshippers.

The airport is designed to handle over 12 million passengers per year.

Denver International Airport is the largest airport, in terms of area size, in North America.

Primarily serving the Denver, Colorado area, it spans over 52.4 square miles and flies to over 215 destinations.

The airport opened 25 years ago in 1995, employing over 35,000 employees. That makes it the largest employer in the whole state of Colorado.

Despite being the third largest airport in the entire world, it ranks as the 20th busiest airport. Over 69 million passengers passed through Denver’s airport in 2020.

Over 23 different airlines operate out of Denver International Airport, and it serves as the hub for some popular American airlines including: United Airlines and Frontier Airlines. It’s also the main operating base for Southwest Airlines.

Dallas/Fort Worth International Airport is so big that it has its own ZIP code and emergency services. Like we said earlier, it’s technically considered its own city, according to the postal service.

Spanning over 27 square miles and serving the Dallas and Fort Worth metroplex, the airport is an impressive place.

It’s the fourth busiest airport in the entire world (by aircraft movements). It also offers service to 260 destinations. The busiest domestic route is to LAX in Los Angeles, California, and their busiest international route is to London Heathrow Airport in the UK.

It’s no surprise that Orlando International Airport made this list. Disney World calls Orlando home and an average of 52 million travel to Disney World every year. They need an airport that can accomodate all of the Disney fans.

Next on the list is another American airport, Washington Dulles International Airport.

This airport is named after John Foster Dulles who was the 52nd Secretary of State. It's fitting that the airport was named after Dulles, considering Washington, DC is home to the White House.

Washington Dulles airport occupies over 13,000 acres in total and it handles over 24 million passengers a year.

It serves 125 destinations and is the hub for United Airlines.

The last American airport to rank in the biggest airports in the world list is the George Bush Intercontinental Airport, located in Houston, Texas.

Similar to the Washington Dulles airport, this one is also named after a politician - George H.W. Bush. It’s also another hub for United Airlines.

It’s slightly smaller than the Washington airport, clocking in at 10,000 acres large, but it handled double the amount of passengers, with over 45 million passing through in 2020.

We’re headed back to China with the Shanghai Pudong International Airport, which ranks #8 on the list of the biggest airports in the world.

It’s located in Pudong, Shanghai and services the Shanghai area. It occupies over 10,000 acres of land and it handled a staggering 74 million passengers in 2020, making it the busiest international gateway of mainland China.

As the only African airport to make this list, Cairo International Airport is an impressive building, located in Heliopolis, Egypt.

It's the busiest airport in all of Egypt too, with over 15 million passengers recorded in 2020.

Cairo International Airport is the primary hub for EgyptAir and Nile Air.

Also known as Bangkok Airport, Suvarnabhumi Airport is one of the biggest in Southeast Asia.

The airport is named after the Sanskrit word for “land of gold”.

Suvarnabhumi has some impressive facts to its name. It covers an area of 8000 acres in Thailand, it handled over 63 million passengers in 2020, and it was the world’s most popular place for taking Instagram photos in 2020.

The airport opened in 2006 and it’s been the hub for Bangkok Airways, Jet Asia Airways, Thai Airways, Thai Smile and Thai Vietjet Air ever since.

Its busiest international route is to Hong Kong.

Content created and supplied by: Jonah123 (via Opera News )