Between Australia and Canada, which is better place to migrate? Find answers

If you are finding it hard to choose between Australia and Canada, below is an analysis of the cost of living, job opportunities, weather, diversity, etc.

Canada and Australia are the two most well-known destinations. Both nations offer a high standard and way of life.

There are a few occupations that are preferred in one nation over the other – for instance, opportunities for health caretakers are preferred in Canada than with Australia, while Australia is broadly mainstream for its US IT firms and their local Head-Quarters.

In Canada, the wages are based on the province. Whereas in Australia the minimum wages are nationwide.

But I will use British Columbia as an instance.

In nutshell, you get paid more in Australia than in Canada.

In Vancouver, Canada for instance, the rent is paid monthly with a deposit of two weeks rent.

While in Melbourne, Australia, the rent is paid weekly with a deposit of 4 weeks rent.

Most rental places don’t provide appliances such as Microwave, fridge, washing machines, etc. While in Canada they come with the accommodation.

Lodging in Canada is much more moderate when compared with Australia.

The cost of living is higher in Australia than in Canada.

Both countries have contradicting seasons. When it is winter in Canada, it is summer in Australia. So, while you wear winter jackets during December in Toronto, in Sydney, you will wear short sleeves.

While Australia has a calm atmosphere with warm summers and mellow winters, with precipitation spread consistently.

Winter in Melbourne, Australia is from June to August, and Vancouver, Canada is from November to January.

Cars are generally cheaper in Vancouver, Canada in than Melbourne, Australia. 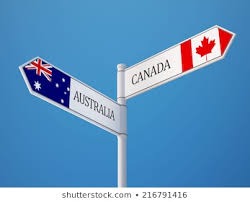 Content created and supplied by: Chinenye497 (via Opera News )

Father Mbaka Shuts Down Adoration Ministry For A Month