By Therdeeq (self media writer) | 1 year ago

Mansa Musa Lion king was the 10th Sultan of the Mali Empire which consisted of the Ghana empire, territories in Mauritania and modern Mali. His many titles included ‘Emir of Melle’, ‘Lord of the Mines of Wangara’, ‘Conqueror of Ghanata Gonga Musa’ and ‘the Lion of Mali’.

His reign saw tremendous growth in wealth, influence, the arts, literature and architecture. Monuments, mosques and madrasas that he built still stand including the Sankoré University, with over 25,000 students and one of the largest libraries in the world (+1million historical manuscripts). Ancient Mali produced 50% of gold globally. 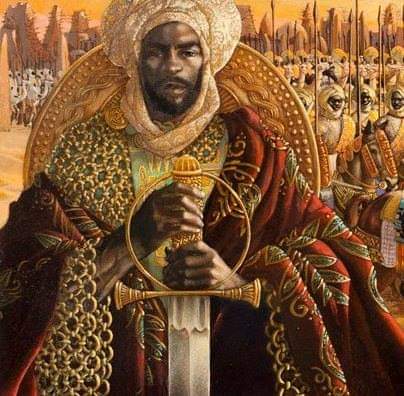 aditionalist, the most known African ruler outside of Africa and the richest man ever, worth an estimated US$400 billion.

He famously made the 4,000 mile pilgrimage to Mecca with 60,000 courtiers, 12,000 servants, hundred camels each carrying 136kg of gold, musicians, slaves wielding golden staffs and exotic animals. His caravan stretched as far as the eye could see. Musa gifted US$1.5 billion in alms and gifts to rulers, inadvertently devastating the economy of regions through which he passed. His flamboyance provoked kingdoms and nations as far as Europe, to find the sources of this incredible wealth. Unfortunately, foreign interests in African wealth often result in interference and exploitation. Foreign curiosity, combined with subsequent weak Sultans and disunity, may have contributed to the eventual demise of the Mali empire.

Content created and supplied by: Therdeeq (via Opera News )