Remember The 7 Ancient Wonders Of The World? See How Many Still Exist (Pictures) The seven wonders of the world depicts the great architectural and art work of the ancient world. Although only one exist as of present day, and some considered to be myths but let's have a look at pictures, and possible remains of this great ancient works.

1. Great Pyramid Of Gaza (Egypt): Also referred to as the pyramid of Khufu, is the oldest and only surviving wonder of the ancient world. It is located in present day Giza, its said to be 146.7 meters in height (481ft). It took up to the 19th century to have a taller building in the world than the pyramid. 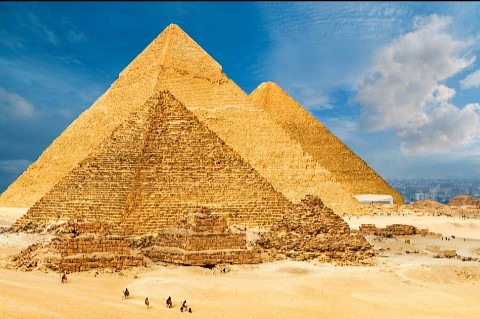 2. Hanging garden of Babylon: It was also one of the 7 wonders of the world before now, with large variety of tied gardens aseembled in ascending form. It was said to be built in Nineveh (Babylon), although its origin and location has not been vividly identified. History has it that its height was up to 75feets above the ground. 3. Statue of Zeus at Olympia: Referred to as a giant statue erected in the form of greek sky and thunder god "Zeus". It was 41ft tall and was said to be destroyed in the 5th century AD. 4. Temple of Artemis: The temple was said to be built more than once, built in the form of greek goddes Artemis. Its present location is said to be in Turkey. 5. Mausoleum at Halcarnassus: Location modern day Turkey, elevated tomb was also another wonder of the ancient world said to be 148ft tall, it was the last surviving of the six destroyed wonders of the world. 6. Colossus of Rhodes: It was a statue built in the form of greek Sun god "Helios", it stood at about 108ft. It was said that the current statue of liberty was built in its like manner. 7. Lighthouse of Alexandra: It was said to be one of the tallest buildings made by man, with height of over 330ft. It was destroyed by earthquakes, location (Egypt).