Top 10 Most Visited Countries in Africa 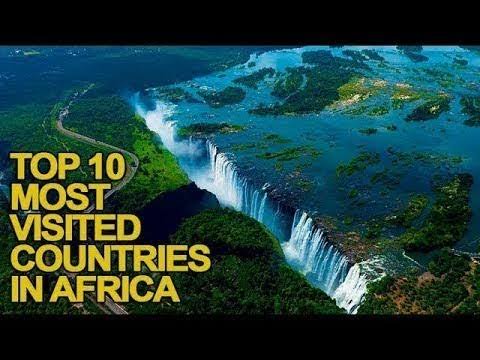 1. Morocco (10-12.3 Million Visitors Per Year):Tourism in Morocco is well developed, maintaining a strong tourist industry focused on the country's coast, culture, and history. Morocco has been one of the most politically stable countries in North Africa, which has allowed tourism to develop. The Moroccan government created a Ministry of Tourism in 1985. Tourism is considered as one of the main foreign exchange sources in Morocco and since 2013 it had the highest number of arrivals out of the countries Africa, 12.3 million tourists were reported to have visited Morocco.

3.Eygpt (8-12 Million Visitors Per Year):Tourism is one of the leading sources of income, crucial to Egypt's economy. At its peak in 2010 the sector employed about 12% of workforce of Egypt serving approximately 14.7 million visitors Egypt, and providing revenues of nearly $12.5 billion as well as contributing more than 11% of GDP and 14.4% of foreign currency revenues.

4. Tunisia (7-12 Million Visitors Per Year):Tourism in Tunisia is an industry that generates around 9.4 million arrivals per year, which makes it one of the most visited countries in Africa. Tunisia has been an attractive destination for tourists since the beginning of the 1960s. Among Tunisia's tourist attractions are its cosmopolitan capital city of Tunis, the ancient ruins of Carthage, the Muslim and Jewish quarters of Jerba, and coastal resorts outside Monastir. According to The New York Times Tunisia is "known for its golden beaches, sunny weather and affordable luxuries.

5. Algeria (1.5- 3 Million Visitors Per Year): Algeria is the largest country in Africa; one of the main tourist attractions is the Sahara, the second largest desert in the world. Algeria has been a member of the World Tourism Organization since 1976. According to a report of the World Tourism Organization published in 2014, Algeria was the 4th largest tourist destination in Africa in 2013 with 2,7 million foreign tourists, and ranks 111th on the international tourism scene, according to the London-based World Tourism and Travel Council (WTTC). The tourism sector in Algeria accounts for 3.9% of the volume of exports, 9.5% of the productive investment rate and 8.1% of the Gross Domestic Product.

6. Zimbabwe (1.5 - 2.8 Million Visitors Per Year):Zimbabwe boasts several tourist attractions, located in almost every region of the country. Before the economic changes, much of the tourism for these locations came to the Zimbabwean side but now Zambia benefits from the tourism. The Victoria Falls Park is also a tourist attraction in this area and is one of the eight main National Parks in Zimbabwe, largest of which is Hwange National Park.

7. Ivory coast( 1.5 - 2.7 Million Visitors Per Year): Ivory Coast's tourism industry has developed significantly since the early 1970s. The country had 11,374 beds in 7,786 hotel rooms and a 70% occupancy rate in 1997. In 1998, there were 301,039 arriving tourists, including more than 73,000 from (Germany), France and United Kingdom. Beaches, tourist villages, and photo safaris through wildlife preserves are some of the main attractions.

8. Kenya(1.4 -2.5 Million Visitors Per Year):Tourism in Kenya is the second-largest source of foreign exchange revenue following agriculture. The Kenya Tourism Board is responsible for maintaining information pertaining to tourism in Kenya

9.Namibia(1.4 - 2 Million Visitors Per Year):Tourism in Namibia is a major industry, contributing N$7.2 billion to the country's Gross domestic product. Annually, over one million travelers visit Namibia, with roughly one in three coming from South Africa, then Germany and finally the United Kingdom, Italy and France. The country is among the prime destinations in Africa and is known for ecotourism which features Namibia extensive wildlife.

10. Uganda(1 - 1.8 Million Visitors Per Year):Tourism in Uganda is focused on Uganda's landscape and wildlife. It is a major driver of employment, investment and foreign exchange, contributing 4.9 trillion Ugandan shillings (US$1.88 billion or €1.4 billion as of August 2013) to Uganda's GDP in the financial year 2012-2013.